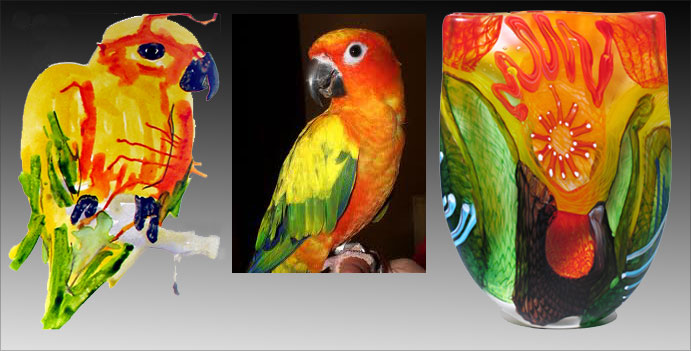 Noel Hart’s studio glass is reminiscent of painting. He has an interest in the plight of bird life around the world and finds rich inspiration in the forests around his home on the North Coast of NSW, Australia. Each piece incorporates the colours and feather formation of the parrot it is based on.

Noel has developed a glassblowing technique inspired by the Middle Eastern core-formed glass from 3500 years ago, replacing the dung/clay core with an expandable glass bubble. Working with a team of glassblowers, the basic hot glass bubble is coated with multiple coloured parts that simulate the plumage of bird species in a painterly manner. A variety of minimalist forms are then blown from the hot glass which will either become finished stand alone works, or used in the creation of unique glass collages.

“My underlying intention with ‘the birds’ is conservation or regeneration.  I’m curious about evolution.  Are species continuing to evolve?  Are there new species coming along?  And I’m interested in the primitive notion of ‘increase’ – the occasions when a ceremony or an artefact or painting was used to initiate the ‘increase’ of a target species.”

Noel has worked with Gannon House Gallery for many years and has worked tirelessly to produce work for exhibitions worldwide. He has exhibited in Chicago, Toronto, London, Vienna, South Africa, Melbourne and Sydney and has a dedicated following of collectors. Covid-19 has unfortunately made international travel hard and to this end we would like to make an extra effort this month to showcase Noels work. Drop into the Gallery or contact us through the contact page to see a personalised selection of his work.

My work usually has something to do with nature.  It’s what switches me on.  Although I grew up in the city, and went to art school in the city, it was the countryside and the bush that I was drawn to.  I went from the city to the land to live – to the forest to be exact, in the late 1980’s. This brought me into contact with other species – hundreds of other species. Snakes, epiphytes, insects, fungi, so many species of birds, rainforest trees, and marsupials.  The energy of the forest and it’s geology was beckoning me to tap into it as a source of artistic inspiration.

There was a lot to try and understand – why does the Satin Bowerbird create sculptures?  Why do certain vines grow the way they do?  Which are the prey species and which are the predators and how do they interact? What about the mushrooms that glow in the dark? Why the bright colours in parrot species? How did the boulders near the house get there? And how could I translate my fascination into art?

The diversity of species also brought me to conclude that it would be satisfying to be creative across a broad spectrum of mediums.  Hence one day I’ll be painting, the next carving something with a chainsaw, and the next working with a team in a glassblowing studio nearby – but all somehow connected by the environment where I was spending most of my time.